UTP or Unshielded Twisted Pair is a type of copper cabling used in LANs and has several categories based on the TIA/EIA 568 standard namely as CAT3,CAT4,CAT5,CAT5E and CAT6. Common connector used with these UTP cables are RJ-45.
Most common used now are CAT5e as it supports up to 1Gbps for 100 meters, and now CAT6 is becoming popular to LAN and datacenter networks as it supports 1Gbps for 100 meters and up to 10Gbps for 50 meters. As of this writing , we also have CAT6a and CAT7 that supports 10G for 100 meters.

There are 3 types of cables that network engineer need to know. A good representation of UTP color coding is from website networkurge.com URL: https://www.networkurge.com/2017/10/utp-cable-color-coding.html as it explain the functions and use. Credits to the owner(ctto) to networkurge for the images.

Straight Cable (T-568B)
-used in router to switch; switch to hosts/servers. This is the most common used type of cable so it’s a must to know this when doing cable crimping by yourself 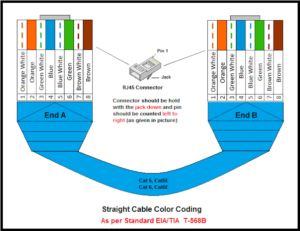 Cross Cable
– previously for similar devices like router to router; or switch to switch. New devices now supports either cross or straight to connect same devices, that’s why seldom use now. 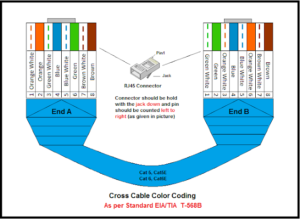 Rollover or Console
-use to access console ports of devices, very useful especially for new devices where remote access is not an option 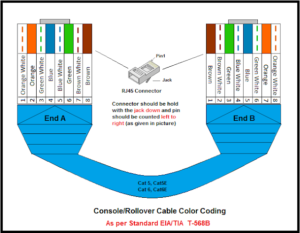 worth of your time #routingtcpip

still one of my favorite networking #books #netwo